Indigenous Australians – the dark side of a golden country

What does come up into your mind if I mention Australian people?

Girls are probably thinking of blond, fit surfers, the others are a little bit confused in between kangaroos and fish and chips and they will maybe end up to think of blond, pale people with doubtfully origin.

Then, few others will maybe think of real Australians, the native people of this land, those who have been living here for more than 60.000 years, those whom we are used to call aborigines: those people that we maybe think isolated in reserves, ghettoised in their native land, fighting to survive in the modern society.

Actually, that would be a simplistic and cowardly picture of reality, something that could perfectly match American native people story.

The real story of Australian natives is not told in our history books, we don’t give to their holocaust as much importance as we do with jewish people or to Foibe massacres.

When it comes up to Australia we study about english colonialism, the big expansion that followed Cook’s arrival on the continent and the peculiar animals who habit this land; when someone is talking about Australia he is probably talking about Australian Open or Great White Sharks; people usually know only the two biggest Australian cities, Sydney and Melbourne, and most of them don’t even know that Canberra is the capital city, Sydney isn’t; people refer to Australia as the place where you can find summer all year and to indicate the perfect habitat for huge spiders.

Although we don’t talk about aboriginal holocaust, we don’t study about their cruel dead in the working fields, we don’t know how they are currently living, we ignore the fact that their culture is daily killed and abused. Nonetheless we absolutely don’t know that the Australian Government, to lighten his conscience and alleviate his guilty feeling, gives big money to every aboriginal born in this lands.

Let’s take a step back: maybe you are a little bit confused, I am as well. I’ve been living in Australia for almost two years now and I have developed an opinion based on what I’ve seen and read, on the informations I’ve found on the internet and on the conversations I had with the new Australians – those who are often blond and have a grandparent from Italy, Ireland or England.

Let’s have a look at history:

How are Indigenous Australians living today?

If what you have been reading so far was sad, I just want to let you know that the most dramatic part has yet to come.

Even if Terra Nullius has been abolished, Indigenous Australians are, nowadays, everything but integrated in the new Australian life, most of them still live in remote areas, those who live in the cities are actually living in the poorest areas of them and too many aboriginal are suffering because of addictions.

So what is the privileged white man doing in this scenario?

He denigrates the black men pushing them to the margins of society and, to clean up his conscience, bestow money around with no real connection to work activities or personal skills.

What do you think are bored outcasts doing with those money? Of course they are buying cigarettes, alcohol and drugs.

Nonetheless it would be simplistic… dramatically sad but simplistic.

It would be simplistic because, besides humiliations, ghettoisation and their struggling to adapt to a completely different lifestyle, many Indigenous Australians keep believing and pass on ancient beliefs and knowledge of their culture.

Nowadays there are, still, Indigenous Australians living in the bush in self contained communities who survive hunting, fishing and picking wild fruits and vegetables.

Most of them are alcohol free, drugs free and fuel free communities (yes, it’s not just a story: many aboriginal are used to get high with fuel).

So, when you will walk around Australian cities and you will see Indigenous Australians playing typical instruments or trying to sell an hand made painting, remember what is behind that attempt to earn some money.

Every time you are admiring aboriginal art pieces in a fancy art gallery just stop for a second and think how much suffering, isolation and racism are hidden behind the the appreciation of a colorful canvas.

And, mostly, when you will watch the Australian Flag, please remind yourself about Indigenous Australians flag and her magnificent point:

Just try to think to all this situation with the point of view of someone who became an undesirable host in his own home. 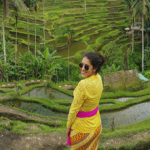 Wanna be a Globetrotter

Wade with love by Onda for Wannabeaglobetrotter.it © Copyright 2022. All rights reserved.
Close